The Greater Boston Food Bank is a key supplier for the Franklin Food Pantry. The Sunday Boston Globe Magazine has an article on the Food Bank’s operation that reads in part:

She’s a trendsetter. The very next shopper, an older woman in a dark red velour jacket, takes a Hubbard, followed a little while later by a middle-aged woman who grabs one, too. After two hours, the doors close. Twenty-seven people have come through the Canton Food Pantry. Three of four Hubbard squash are gone.

Less than two weeks before, those Hubbards were still on the vine at a nearby farm. Over the course of 10 days, they were picked, sold to the Greater Boston Food Bank, and then distributed to food pantries like this one, and to other hunger-relief agencies in the area. The life of these Hubbard squash, from the field to the tables of the needy, helps tell the story of a bigger journey: the evolution and expansion of the food bank, which has matured into a state-of-the-art food distribution giant that now feeds more than 90,000 people a week.

The food bank made a splash a few years ago by building a new headquarters alongside Interstate 93 south of downtown. You’ve seen it — the one with 565 accent panels on the facade that, viewed from a certain angle, depict a red ear of wheat. If you’re like me, you’ve driven by and wondered, what goes on in that cavernous place, anyway? The answer is this: a lot more than I thought. 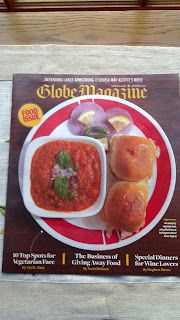